Senate Bill 1231 and its companion bill in the House of Representatives (House Bill 196) are joint resolutions proposing an amendment to the Pennsylvania Constitution that creates regional districts from which Supreme Court justices, Superior Court, and Commonwealth Court judges would be elected.

The process for amending the Constitution in Pennsylvania requires a joint resolution to be passed by a simple majority in both chambers of the General Assembly in two consecutive legislative sessions, and then be approved by majority vote by the people of Pennsylvania in a ballot referendum.

Senate Bill 1231 and its House companion (House Bill 196) are joint resolutions that propose an amendment to the Pennsylvania Constitution that creates regional districts from which the 7 Supreme Court justices, 15 Superior Court judges, and 9 Commonwealth Court judges would be elected. The joint resolution states that each district shall provide every resident of the Commonwealth with approximately equal representation.

The judicial districts would be drawn following the redistricting principles found in the Pennsylvania Constitution, requiring populations as equal as possible in each district with compact and contiguous geographic boundaries, and would comport with the federal Voting Rights Act of 1965. No county, city, incorporated town, borough, township, or ward shall be divided unless absolutely necessary. The districts would also be consistent with any future Constitutional amendments to reform redistricting, such as the effort to establish an independent citizens redistricting commission in Senate Bill 22.

Regional judicial districts are to be realigned every 10 years, and importantly, candidates for appellate seats would be required to reside in the district they would represent on the court. Further, the bill does not change the way cases are assigned at the appellate level, nor does it set up regional courts.

As a proposed constitutional amendment, this legislation must pass each chamber of the General Assembly in two consecutive legislative sessions and then must be presented to the voters for adoption.

Senator Aument explains his amendment to SB22 on the Senate floor.

Senate Republicans hold a Q&A session with the media to provide an update on the status of SB22.

June 13, 2018: The Pennsylvania Senate passes Senate Bill 22 as amended, but time in the legislative session runs out before the House of Representatives can pass the bill. Floor debate on SB22 from the Senate Journal pages 618-627.

December 18, 2019: The House of Representatives passes House Bill 196 and sends the bill to the Senate for consideration. Floor debate on HB196  from the House Journal pages 2070-2073.

Senator Aument speaks in favor of House Bill 196 on the Senate floor.

To continue tracking each of these bills as they progress through the legislative process, please visit the Pennsylvania General Assembly’s website:

The Pennsylvania Supreme Court has increasingly engaged in political activism in recent years, including:

The fact of the matter is, powerful special interests with business before the courts have a vested interest in the outcomes of these elections and have therefore invested millions and millions of dollars to determine who is chosen to preside over these courts. Implementing a judicial district system in Pennsylvania would empower individual voters over that of special interests whose influence has clearly prevailed in recent court decisions. Increasing geographical diversity will inherently diminish the power of those special interests that are concentrated in urban areas. Further, a regional judicial district model will also allow voters the opportunity to get to know their candidates better and make more informed decisions at the ballot box, rather than relying on a statewide mailer or 30 second TV ad.

Because this proposal was drafted as a constitutional amendment, it is ultimately the people of this state that will decide what system should be used to elect our judges, because constitutional amendments must be approved by voters at the ballot box. This approach empowers the residents of Pennsylvania to make their own decisions about how this Commonwealth is governed and it restores the proper balance of power to prioritize people over special interests.

In reviewing the current compliment of Pennsylvania’s appellate courts, it is clear based on the data that the representation is severely disproportionate and unfair: 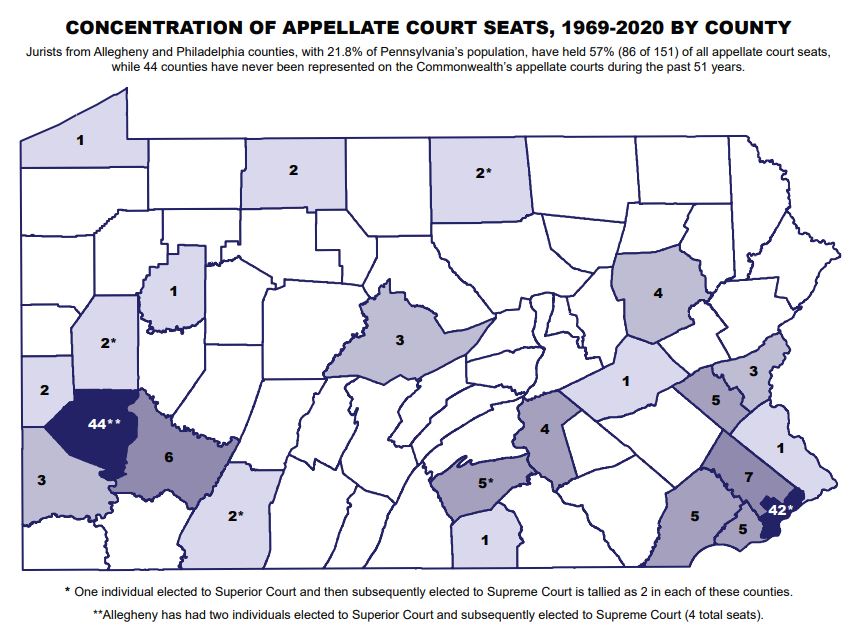 In order to promote greater diversity and fairness in judicial service, eleven other states (Arkansas, Illinois, Kentucky, Louisiana, Michigan, Minnesota, Mississippi, Ohio, Texas, Washington, and Wisconsin) select judges and justices for either some or all of their appellate courts through the use of regional judicial district elections. Further, the federal U.S. Courts of Appeals and U.S. District Courts also operate under regional system.

Recognizes the Value of Geographic Diversity

While Pennsylvania’s statewide judges and justices should certainly not be swayed by or beholden to the court of public opinion when deciding cases, the process we use before those candidates are selected to serve in the courts ought to be reformed to ensure that all residents of Pennsylvania are represented fairly on the bench. The judicial branch must operate independently of public opinion and consider only the law and Constitution when deciding cases; however, it is inappropriate to permit statewide judges and justices to be chosen in a way that results in disproportionate representation. As such, where judges live and come from matters greatly, because judicial diversity guarantees that regional attitudes toward legal theory are more fairly represented on our courts.

This is why Pennsylvania Modern Courts and nearly every other proposal to institute other methods of judicial selection (such as merit selection) recognize that geographic diversity is beneficial on courts.

If fairness truly matters, then giving every Pennsylvanian a genuine voice on each appellate court should be supported by everyone who argues that proportional representation in Congress and the General Assembly is important.

This proposal preserves the election of judges and, in fact, enhances accountability through that system. In these judicial races, voters rarely recognize the names or platforms of the candidates they are expected to choose. Once elected, judges are largely removed from the public eye and their decisions and opinions rarely receive statewide attention. However, in regional districts, voters are more likely to recognize or remember their jurist, their jurist’s platform, and whether incumbent candidates kept their word in their capacity as a judge. In short, a regional judicial district model will allow voters the opportunity to get to know their candidates better and make more informed decisions at the ballot box.

Argument: Implementing judicial districts is an attempt to gerrymander the courts.

Rebuttal: The judicial district maps would be drawn in the same manner as Congressional maps.  Should the General Assembly choose to reform that process, the new process would apply to the judicial maps as well. For example, should the General Assembly amend the Pennsylvania Constitution to require that districts be drawn by an independent citizens redistricting commission, judicial districts will be included in that process.

Argument: Judges are meant to interpret the laws, not represent constituents from certain areas of the state.

Rebuttal: Judges would not “represent” anyone on the courts.  However, background certainly influences one’s interpretation of issues, including laws. While Pennsylvania’s statewide judges and justices should certainly not be swayed by or beholden to the court of public opinion when deciding cases, it is inappropriate to permit statewide judges and justices to be chosen in a way that results in disproportionate representation. As such, where judges live and come from matters greatly, because judicial diversity guarantees that regional attitudes toward legal theory are more fairly represented on our courts.

Rebuttal: Judicial candidates in Pennsylvania already run partisan campaigns on political issues in order to get elected to serve on the bench.  However, most of the candidates that have enough financial backing to run statewide campaigns are residents of the same two counties. All elections are inherently political, so any method of electing jurists rather than appointing them will therefore be impacted by politics. Implementing a regional judicial district system will diminish political influence in judicial races by empowering individual voters over special interests and increasing geographical diversity on the bench. Further, electing judges by region does not create “constituencies” due to the longevity of the ten-year terms judges serve. Rather, it guarantees that regional attitudes toward judicial theory are more fairly represented on our courts.

Argument: Merit selection of jurists would be a better approach to reform our judicial system.

Rebuttal: Nothing in the bill would prohibit merit selection.  Should the Commonwealth move to a merit selection process, appointees would be chosen for each region. Additionally, Common Pleas judges, who also rule on statewide law, are currently elected by region as well, and there is no shortage of qualified candidates seeking those positions in Pennsylvania’s 67 counties.

Rebuttal: Currently, out of 31 appellate court seats, there is only one person of color occupying an appellate court seat. Further, that has historically been the case over the last 50 years, with only about five persons of color total on the courts during that time. This clearly indicates a lack of diversity and potential discrimination from the urban areas which currently dominate our court seats. Further, the lack of regional diversity on our courts is the real problem, as our courts are missing out on legitimate judicial theory and attitudes which thrive in areas outside our two dominant urban counties.

Argument: Judicial districts will disenfranchise voters by preventing them from voting on the majority of judges that may be called upon to decide cases affecting them and the communities in which they live.

Rebuttal: This argument acknowledges the need for regional diversity and the importance of community representation. In expressing concern that judicial districts will prevent voters from choosing local candidates for jurists that decide local cases, the argument admits that there is a lack of confidence in a jurist’s ability to appropriately decide cases affecting communities other than that in which the jurist resides. Further, there are plenty of qualified and worthy lawyers and jurists from both parties that live across the state that deserve to be considered for these great positions.

The goal of this legislation is simple – fairness. According to recent precedent set by the Pennsylvania Supreme Court, the opportunity to represent the people of Pennsylvania should be fair. In keeping with that laudable goal, this proposal further enshrines that principle into our Constitution so that we would no longer have disproportionate representation on the appellate judicial bench.